Did you buy a house before the pandemic? If you waited until last year or you're still renting, you'll likely be on the wrong side of a growing national wealth divide — here's why

And it's not impacting the country equally either.

If you bought a house before 2022, then you should count yourself among the very fortunate.

The rise in mortgage rates coupled with still steep housing prices in most markets is quickly putting housing affordability out of reach for many.

Nadia Evangelou, senior economist for the National Association of Realtors, noted in December that mortgage rates are still more than double what they were a year ago and limited inventory is keeping prices high.

She says buyers who earn $75,000 a year “face the most significant housing shortage compared to any other income group.”

“In a balanced market, these buyers should be able to afford half of the homes listed for sale. However, these middle-income buyers can afford to buy only 20% of all available listings,” wrote Evangelou in a NAR blog.

While everyone is struggling, the situation is especially acute for first-time buyers — and it’s preventing them from building the kind of financial security that comes with owning a home.

And since homeownership is the primary source of wealth for most families, it’s only serving to exacerbate a wealth gap between those who own homes and those who don’t.

How we got here

During the Great Recession, housing prices dropped 33% across the country. But the historically low interest rates that followed made for a pretty good buying opportunity.

In the decade that preceded the pandemic, the value of owner-occupied housing climbed back up. In nearly 100 metros, home values rose more than $8 trillion, according to a report from the National Association of Realtors.

But it was the ultra-low interest rates during the pandemic years that encouraged a boom in buying, causing house prices to spike to historic levels in many areas — and pushing homeownership out of sight for many.

Since the beginning of the pandemic, the cost of owning a home has hit new heights. According to a December housing report from Zillow, the monthly mortgage payment on a typical home has more than doubled since 2019, going from $897 to $1,809.

That makes it doubly hard to actually get your footing on the property ladder, if you aren’t already. But it also means that people who owned before pandemic demand sent prices soaring have the advantage of a lower mortgage payment and, very likely, a lower locked-in interest rate.

They’re paying that much less every month for housing than the person who bought during the pandemic, or since interest rates began rising in mid-2022. 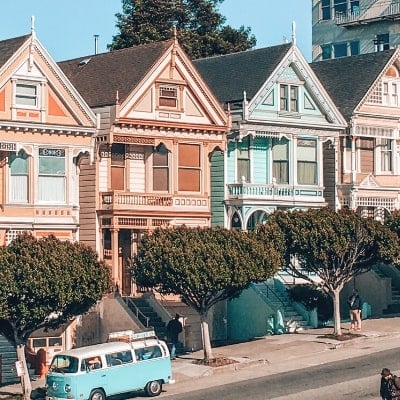 The wealth disparity is growing

Which means the net worth of homeowners is rising a lot faster than it is for non-homeowners.

That being said, there was already a significant gap. The median household net worth of homeowners was about 40 times higher than that of renters before the pandemic, according to a survey released by the Federal Reserve in 2020.

Now, there’s likely a much greater difference thanks in part to home equity and rental prices.

Nearly half of American homeowners were considered “equity rich” by mid-2022, according to ATTOM’s U.S. Home Equity and Underwater report.

It’s the highest percentage ever seen, said Rick Sharga, executive vice president of market intelligence at ATTOM, which collects housing data from markets across the country. To be equity rich means that the loan on your house is half, or less than half, of the estimated market value of your house.

But it’s concentrated in certain areas

But not every corner of the country has been equally impacted. Eight of the top 10 equity-rich states are in the West, while 12 of the 15 states with the lowest percentages of equity-rich homes were in the Midwest and South.

At the same time, rental prices have sky-rocketed in major metros.

The average rent for a one-bedroom in New York City, according to online apartment search engine Zumper, is nearly $4,000. That’s a year-over-year jump of 20%. In San Francisco, the average one-bedroom is $3,000 — 10% higher than last year.

If you’re paying rent in a major city, it’s going to be hard to save for a down payment, putting homeownership that much further down the line.

It stands to reason that those who have homes, and who bought them at the right time, will continue to see their net worth increase. While people who haven’t bought will continue to fall behind — especially if they live in an expensive city.

More: Is now a good time to buy a house?

Nearly 75% of recent homebuyers have regrets

Grow your money by investing in farmland

You might be surprised by a few things when it comes to the $1 bill.