It's not too late to invest in commodities — especially this one.

If you’re concerned about high inflation and geopolitical uncertainty right now (who isn’t?), there’s one person worth listening to: investing legend Jim Rogers.

“I was working very, very hard. I still love what I'm doing. But I'm not working nearly as hard as I did then,” he told Kitco News last month. “There were many opportunities that we took advantage of all over the world, and we used a lot of leverage.”

Could this be another opportunity for Rogers to apply his expertise? He’s certainly confident about what to do in today’s environment.

“If you can find assets that are going to go up in price during inflation, that’s one way to be successful, or if you can find hated assets. “

Let’s dig in and learn what Rogers means by that.

We'll send you money-making insights and timely tips every Wednesday.

Last month, the Fed raised rates on its benchmark Federal Funds Rate by 0.25%, marking its first rate hike since 2018.

But Rogers doesn’t think this is enough to put a stop to spiking price levels. In fact, he believes in not having a central bank at all.

“Very few central banks ever in history have gotten it right about anything,” Rogers says. “The best thing they could all do is resign, stop printing money and resign, let markets determine interest rates.”

Rogers points out that whenever central banks print huge amounts of money, it has “always led to higher inflation.”

Stabilize your portfolio by investing in farmland

Farmland is one of the top asset classes capable of insulating your money from volatile market conditions. Learn how you can use FarmTogether to safeguard your portfolio.

What are the specific assets that, in Rogers’ words, “go up in price during inflation”?

One asset class that certainly fits that description is commodities.

Commodity prices are commonly believed to be a leading indicator of inflation. When the cost of raw materials goes up, that eventually gets reflected in the price of final products — and consumer prices go up.

For an easy way to get exposure to agricultural commodities, Rogers says you can look into the Elements Rogers International Commodity Index-Agriculture Total Return ETN (RJA).

Rogers also believes in taking a contrarian approach to fighting against inflation, using the country of Venezuela as an example.

Rogers can’t invest in Venezuela due to U.S. sanctions imposed on the South American nation in 2019. But he thinks the long-term risk/reward tradeoff might be worth it for those who can.

“That's the kind of place that if you get it right, when there's a disaster on, you will probably be successful in a few years,” he says. “I'm not advocating Venezuela, it's illegal for me now. But it might have been an opportunity and is for some people where it's not illegal.”

A relatively safe way to gain exposure to Venezuela is through U.S. companies that have joint ventures in the country. Oil giant Chevron, for example, is ready to take control of its Venuezelan joint ventures if Washington eases its sanctions.

Stabilize your portfolio by investing in farmland 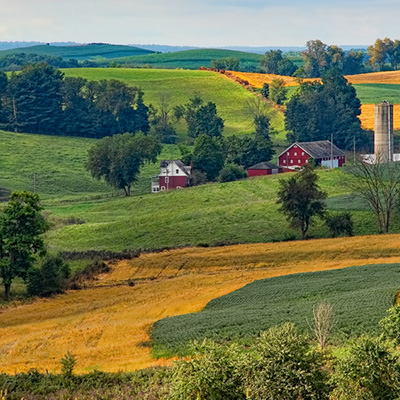 Farmland is one of the top asset classes capable of insulating your money from volatile market conditions. Learn how you can use FarmTogether to safeguard your portfolio.

Diversify your investments with farmland

You don’t have to own a farm to profit off farmland.

Farmland has proven to be one of the most stable assets of the past few decades — and with FarmTogether, you’re able to invest today. FarmTogether's platform gives accredited investors access to this exciting market, and one of the highest-yielding asset classes on a risk-return basis.

Sign up for FarmTogether to start investing in farmland.

How to invest in gold

Here's how to dabble in the most popular investment in human history.

Want to bet on a bounce? Consider these three stocks first.

Stash vs. Acorns vs. Robinhood vs. Betterment

These four popular apps make investing easy, but which one makes more sense for you?